My full island landscape with the playable area in the foreground and mountains in the background.

The robotic defence unit reaching out a hand for the player to climb onto.

The facility building at the beginning of my level surrounded by lakes, statues and paths.

The corridor in the living facility where the player begins the level.

The pathway down to the beach framed by an archway.

The beach and ocean area at the ennd of my level.

The ruined fences that keep the player within the level.

A short trailer video I captured in Unreal depicting the main areas around my environment.

A walkthrough video of my level from start to finish.

A showreel video of the main assets I created for my environment. Turntable renders depict the various material channels behind each asset.

The defence robot rising out of the sea as the player reaches the beach.

A view of the mountain background with the sun setting behind.

My hero shell tower building as seen from the shore of the island.

A tree by the beach with the ocean and sky in the background.

Photographs of 6 3D prints I created of each of the major building and assets I made for my level.

A short storyboard I created to plan out the narrative of my game level.

A sketch of my shell shaped hero building towering out of the water.

An initial concept sketch of my game environment.

A design drawing for my large robotic character.

Golden Tide Island is a game level set on a sci-fi tropical island. I wanted to explore the juxtaposition of this peaceful natural landscape against the backdrop of towering ruins of manmade architecture. It is set in a near future where biological warfare has forced the remainder of the human race to live in remote colonies. The player wakes up after a coma to find the living facility empty. They explore the island, walking down to the beach. Suddenly, a large combat robot emerges from the sea. Although the situation seems dangerous, the robot extends a hand for the player to climb onto…

I wanted to convey this world using a vibrant colour palette and cel-shaded art style. I took inspiration from the natural, flowing shapes of seashells when designing some of my buildings. The main programs I used were 3DS Max, Substance Painter and Unreal Engine. 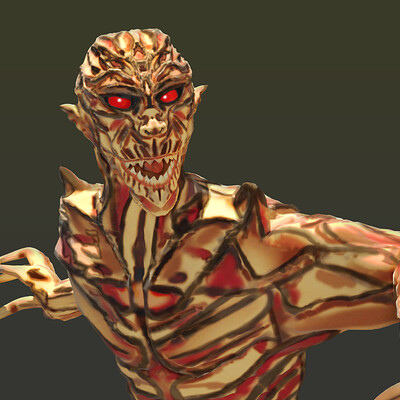